Today is the twelve day of a lunar calendar. It also mean the beginning of a good current flow n tide cycle.It already 8.30pm. Looking at the sky the weather look fine. Decided to go for a short session of fishing n squid hunting.
Reach there around 9pm. Already somebody light up a squid lamp there. Decided not to light up my lamp but to wait n see. Instead I fixed up my tackle n casted out. My initial bait was cuttle fish. The current was fast as it already quite high. Have to erect up my rod to minimise the water resistance of my line. Proceed to fixed up my squid net n do squid serching under the jetty light.
My first check on the bait was lasting. Fifteen minute later I decided to change the bait to tamban as the passed day, most of the ray catches was on this bait. Continues to do my squid serching.
Just about ten minute later, suddenly my reel alarm went off. I pickup n strike. Hoho… this fellow is bigggrrrrr. It took my line n headed out straight to deeper water. It took me a few time to tighten up more drag to stop this fellow. When it finally stop, hooof….meters n meters of line has been strip. Without hesitating, I gave a few hard pump n it already at midwater. Very lucky was that by now the tide has passed it full n the current has die down. So this fellow can’t use it weight n the current flow to prolong the fight. But it still manage to do some very strong tug of war with me. haha…I finally win the battle as this fish has no match on the powerful rod that I am holding. Ya…it proof that this rod still can take on bigger monster as it handle this fellow with ease.
I surface it n after making sure that it has tired out, I pass my rod to a angler there to hold while I fixed up my gaff. Upon landing, it weigh at 11.5kg. It is a female long tail brown stingray. Double check n it did not pregnant.haha…..

It was almost near to 12am after I took photographs on it. As i have to work today, I decided to gave the catch to the angler that help me to hold my rod. 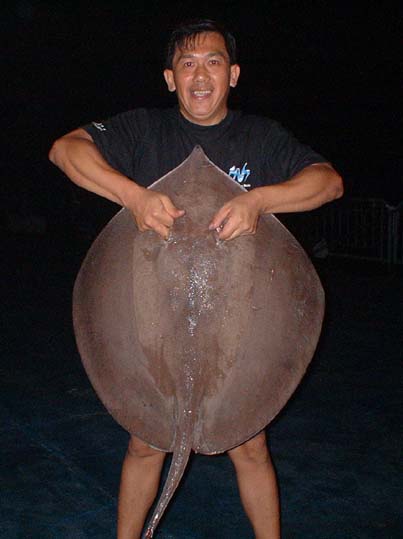