Bedok jetty was crowded on saturday evening. But the sky was full of rain cloud n lightning when I reach there. Waited for almost 2 hour for the sky to clear before I set up my light to catch squid. Casted one rod out with dead tamban as bait n it was so lasting. Whole night I only need to change one time bait. This gave me the chance to concentrate on catching the squid. Was there until 2am n decide to packup to take a rest.  Went in to the jetty again this morning around 7.30am. Tide was at the lower end n current was slow. While waiting for the tide to turn around, I spent time jigging for tamban n keep it alive. Finally the tide turn up around 9.15am. Down goes the cable car rig. Another rod with a bottom feeder rig. !0.20am I finally hear the sound I waiting for.. My abu reel alarm went off with a short screech. Just nearby so pickup n strike..The fish make a acrobatic jump on the sea surface n dive deep down. Haha…but I already catch a glime of it. Yes….queenie n bigger than yesterday one. Gave that fellow a hard pump n it was on the way up. However it has cross two line by now n make up some messy there. I told the other two anglers to release the line so that I have a better control on it. I bring it to the surface n hang it head up in the air. Within minute it already slump n I ask one guy to grab hold of my leader n lift it up. Hoho…it about near to 2kg. Decided to take home as it was already half dead. Plus the yesterday one…haha…I will be having fish fillet very soon. 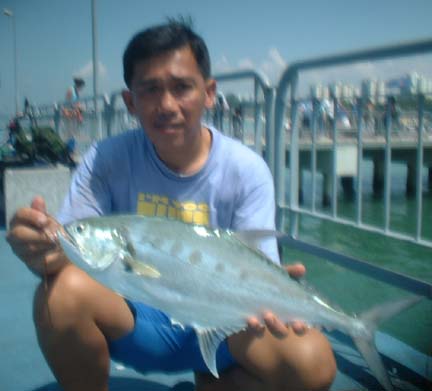