Reach jetty around 7pm. It was not crowded think due to the threatening sky earlier. Tide was just starting on the up side n current was slow in the beginning. Only bring one set of tackle as expected too crowded on most saturday night. Quickly setup, casted out n also the squid lamp n scoop net.

Current start to move faster n stronger. Bait was lasting so concentrate on looking out for squid. Manage to caught one after some hard work. Hook it up as pickup to attract other squid.

Around 9pm….a guy come along n tell me my rod tip has some rattle. I lookup n saw my line has flown very far right along with the current. Pick it up n strike. Oooh…. heavy….but no feeling. Slowly pump the rod n wind back the line. Oop… when surface…it was a nice big barracuda there. Haha…it has took the bait n got hookup but was wash along with the current until almost dead. That why it didn’t even got strenght to struggle. Too heavy to lift it up with my rod so I use hand instead. Haha… it attracted quite a number of admirer on this saturday night. Many took photos on it. I weight it n it hit the scale at 4kg.

Suddenly I heard one guy ask me. ” U want to sell this fish” Oop…haha… I say “yes”…”how much U offer”. I decided to sell it as my freezer still have one queenie n a smaller barracuda inside. Even if I don’t sell it, I might gave away too as I will only be back home tomorrow noon. So to keep it fresh is a big problem. The guy can’t decide a price. I then say how about 20 buck ? He immediately say” oh…ok…it cheap…only 5 buck per kg”. Haha… I quickly pull out a big plastic bag n handed him the fish. Hoho…20 buck in pocket…Time to get back to catch squid. 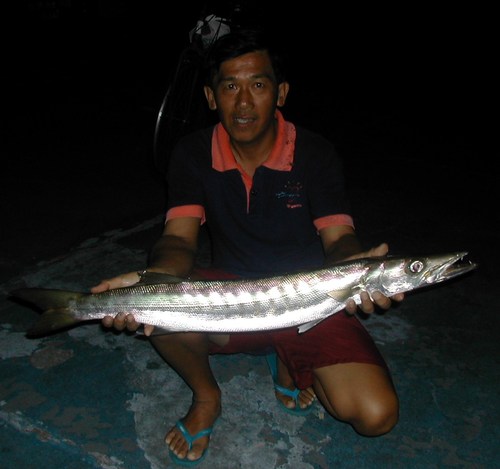